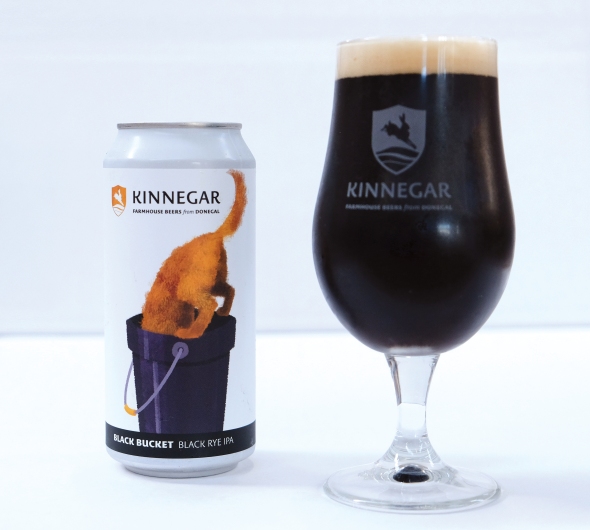 We are exceptionally proud that Black Bucket, our Black Rye IPA, has won a Gold Medal at the 2018 Brussels Beer Challenge.

We’re particularly delighted to fly the Irish flag amongst so many international giants.

Bucket & Spade for the Bank Holiday Weekend in Donegal

We named this beer without looking at the long range weather forecast but for once the stars have aligned. Bucket & Spade debuts this weekend in Donegal with the prospect of trips to the beach looking exceptionally promising.

Made with the help of participants on our second Kinnegar Brewing Academy, Bucket & Spade is an easy-going session rye IPA. It joins its rye brethern on the “Bucket” branch of the Kinnegar family tree. At 4%ABV it’s certainly one for the beach and, just in case the weather should break, it doubles beautifully as a beer for the Euros.

You’ll find it in our Taproom at Rathmullan House and a few other outlets in Donegal for the long weekend. It ventures out into the rest of the world next week.

How many tiddly little towns in the country have enjoyed a week like the one Rathmullan is experiencing just now? Here’s the roll of honour:

Sunday 29 May
Kinnegar Brewing’s Flying Saucer claims the “Champion Beer of Ireland” title at the Killarney Beer Festival, adding to its gold medal in the Stouts & Porters category and White Rabbit’s silver medal in the Wheat Ales category. > Read more

Monday 30 May
The Beachcomber hits the headlines when listed in The Irish Mirror’s “Best Beer Gardens in Ireland – 19 perfect spots you have to enjoy a pint in while the weather is this good.” > Read more

The record speaks for itself. We’re proud to be part of it!

In a world of Davids and Goliaths, little guys like us must choose our battles wisely. That’s why we, as a small independent company with a non-existent marketing budget, make our decisions about sponsorship very carefully indeed.

The Dublin-based design conference, Offset, seemed to be the perfect sponsorship match for us. Offset is Irish and independent. As it says of itself, “Offset has fast become one of the world’s most inspirational, educational and vocational conferences for the design and creative industries. Representing industry at all levels, Offset’s speakers are key disruptors and influencers in their field…”

Offset too seemed to think its audience was a good fit for us – ideal for us to support 2016’s new Offsite fringe festival. They agreed to a small and mutually beneficial sponsorship package. Agreed, that is, until they dumped Kinnegar on the rubbish heap and waltzed through the “Open Gate” to an exclusive* sponsorship deal with Big Beer at Diageo.

In doing so, Offset has deprived its audience of a pretty good story. It’s the story of how two people first ran a small, well-respected design practice and then opened a small, well-respected brewery. It’s about being independent and committed and entrepreneurial, about having vision, about rejuvenating a dying beer tradition of which Ireland can again be proud.

And what does all this say about the ‘Open Gate’ approach to producing craft beer? For decades, Guinness and Diageo played a central role in the death and decline of brewing in Ireland. Now, after feeling the collective pressure of the little guys, they’ve suddenly discovered their craft beer soul.

For us, craft beer is about being open and transparent, it is about being part of an independent, free-spirited community of beer brewers and drinkers. The Open Gate approach to removing all other beers from the landscape sounds to us like a Big Beer approach to craft brewing – it sounds exactly like the type of practice that led to the death and decline of brewing in Ireland.

There is of course a design story in there too — the story of how branding and design is used to bamboozle an audience into believing that Diageo is an authentic little craft brewery breaking the boundaries in its experimental workshop. We know Offset’s audience to be smarter than that.

How nice it would be for visiting speakers to discover something new in their VIP goody bags. How radical it would be to offer visitors to fringe events beer that doesn’t come from St James’s Gate. How stimulating it would be to hear more than one side of the Irish craft-brewing story in panel discussions on the third stage at Offset.

Offset says it believes in giving an equal platform for the best-established and next generation of local design practitioners. Apparently, they don’t feel this applies to the field of brewing.

*Offset have subsequently pointed out to us that the exclusive nature of the arrangement was insisted upon by Offset, not The Open Gate.

March 22, 2016 | Categories: On the grapevine, Uncategorized | Leave a comment 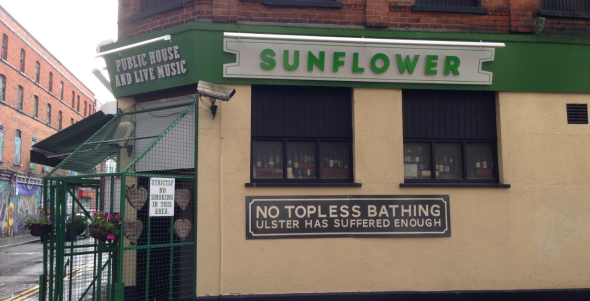 As many of our Belfast-based supporters will already be aware, the iconic Sunflower pub in the city’s resurgent cathedral quarter is under threat of demolition. Harking back to a dated, and long-discredited approach to urban regeneration, the Belfast planners have decided to level entire city blocks in the quarter, thereby erasing the existing urban fabric, and with it, the Sunflower.

In a few short years, Pedro Donald and his staff have transformed the Sunflower into the best pub in Ulster (2015) and a cultural beacon. They’ve contributed in no small part to the resurgence of the neighbourhood the planners are now targeting for demolition and regeneration.

To the ramparts we say! Help save the Sunflower by signing the online petition form.
> Take me to the petition now!

Going where few have gone before: Good luck, Jason

For a man so deeply immersed in his own local community in Donegal, Jason Black’s panoramic world view, combined with a belief that anything is possible if you try hard enough, is anything but parochial. As an ardent advocate of his local brewery, Jason has many times wished Kinnegar well. Today we’d like to wish you well, Jason. The very, very best of luck as you undertake K2. We’ll be following your blog and wishing you Godspeed every step of the way. There’s a Scraggy Bay on ice for you when you get home in September.

The competition on the shortlist looks very impressive – there seems to be an abundance of good new Startups with great products and a wealth of good ideas emerging at the moment. Which is great to see and hopefully a good indicator that the future is looking brighter for the Irish economy, but it’s a little intimidating from where we’re sitting.

The next step in the process involves what is described as a ‘Dragon’s Den’ style interview with the judging panel. Guess that means we should expect a good old grilling and plenty of tough questions. Nothing like a little more pressure to spice up the rest of the week.

For more information on the awards visit 2014 Startup Awards

One of our enterprising fans has decided that a visit to the brewery would make a wonderful Father’s Day gift for the two most important men in her life. She had to do a bit of detective work to find out the details about our newly-instated brewery tours but we’ve decided to make it a little easier for the rest of you. Just check out our new Visits page for information.

A word of warning for any of you who are in a rush — this Saturday is a brew day so tours won’t be available. Sorry about that!

As Dublin Cookery School‘s Lynda Booth plumbed the depths of her energy reserves to get her first book to press, she discovered that she could relax with a beer without falling asleep while working a night shift. We’re very proud that it was Kinnegar that opened the eyes of this diehard wine drinker (and very talented cookery writer) to the world of beer. And delighted to see that the beer gets a special mention in the acknowledgements!

Look out for “From Lynda’s Table” — it’s a superb new Irish cookbook that you can buy online directly from Dublin Cookery School or from the shelves of all good bookshops.

A Long Tongue for Thanksgiving

Kinnegar celebrates Thanksgiving this Thursday with the debut of our first special brew. We have a lot to give thanks for in 2013.

Long Tongue is a warming winter’s ale made with pumpkin, ginger, rye and a hint of cinnamon. Special thanks to Donal Doherty at Harry’s restaurant in Bridgend for supplying this season’s pumpkins from his walled garden at Burt, and to Keelan McMichael and staff at Rathmullan House for helping Rick to roast them. Happy Thanksgiving. 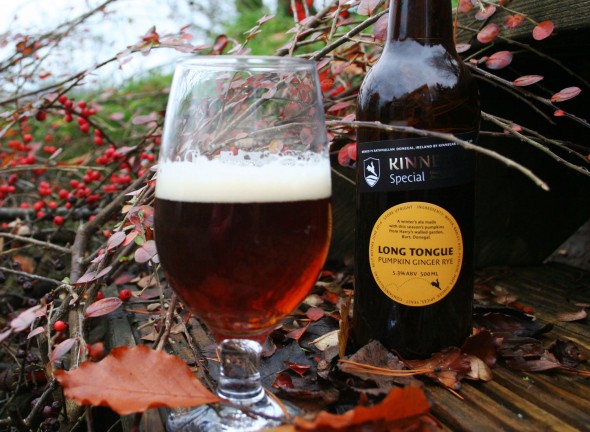 November 26, 2013 | Categories: A brewery grows, On the grapevine, On the ground | Leave a comment

Try before you die

No small brewery in Ireland can match the advertising spend of its conventional competitors. The relative worth of a positive word from a respected journalist is incalculable. We’re very grateful for recent coverage in October’s Totally Dublin, from Caroline Hennessy (bibliocook.com) in Easy Food Magazine’s Christmas Annual, and in the Irish Times Magazine. Equally, on the great digital grapevine, we particularly appreciated the compliment paid recently in The Daily Edge. A place in the list of 18 Irish delicacies you must try before you die is quite an honour. We’re enjoying the good company at this particular feast.